The National Gallery of Canada 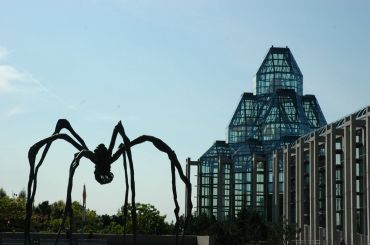 The National Gallery of Canada is located in the capital city Ottawa and is one of Canada’s premier art galleries.

The Gallery was formed in 1880 by Canada’s Governor General John Douglas Sutherland Campbell and since, it has changed its location several times. The unique futuristic building made of granite and glass built in 1988 by the architect Moshe Safdie became the Gallery’s ideal house. The marvellous structure on Sussex Drive faces beautiful Parliament of Canada buildings. In 2005, a sculpture of a giant spider called Maman was installed in the plaza in front of the Gallery.

The National Gallery has a large and varied collection of artworks of members of the Royal Music Conservatoire and of renowned masters of Europe.

The acquisition of the first painting "With Dolly at the Sabot-makers" by William Brymner was remarkable for the Gallery. For several decades after its foundation, the museum was buying more and more great artworks becoming more and more popular. By the mid-20th century, the artworks by Rembrandt van Rijn, Paul Cezanne, Filippino Lippi and many other great masters were exhibited here. The following years, the collection has been enriched with the works of European and local artists.

At present, the renowned and prestigious Gallery can afford the most expensive world’s treasures. Thus, in 1990 the museum bought “Voice of Fire” by Barnett Newman for more than 1.5 million dollars. In 2005, the priceless collection was expanded by the painting of Italian Renaissance master Francesco Salviati, which cost the museum 4.5 million.

It should be noted that since 1918, the Gallery in Ottawa owns one of the most famous works of the American art – painting "The Death of General Wolfe" created by Benjamin West in 1770. The painting is very popular due to its subject matter. It depicts the battle for the present territory of Canada between England and France. The foreground shows an Indian. The artist made it in the way that everyone can understand what historic events the artwork tells about.

The museum features a collection of works of Canadian artists like Tom Thomson, Alex Colville, Emily Carr. Of a particular interest are the paintings by the so-called "Group of Seven" artists. They are regarded for their landscape painting skill. Artworks by the cult figure Andy Warhol are also represented in the Gallery.

The list of artists represented at the National Gallery of Canada is long. Every year the Gallery expands its priceless collection of arts without ignoring a contemporary art. The National Gallery of Canada is one of the first museums in the world that have recognised the art of photography. This is why the works of the great artists are exhibited here along with the best works of photographers, media art and video art.

The gallery also hosts art classes for children and workshops for adults. Without a doubt, visiting the Canadian National Gallery everyone can experience the world of beauty, feel the great power of art and its important role in the life of mankind.

Feedback
Your attention and time spent on the site IGotoWorld.com is greatly appreciated. If you have any questions, wishes, complaints, or you desire to learn more about us, select the area you are interested in and click the link to make a comment or ask a question.
Feedback form
Request submitted successfully.
Send